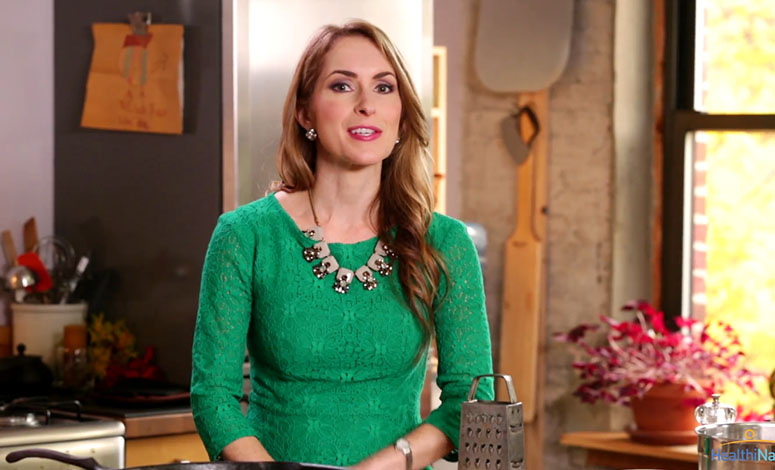 Nutritionist and author Frances Largeman-Roth shares her recipe for making potato pumpkin latkes using Idaho potatoes, a yellow onion, an egg, pumpkin puree, salt, pepper and olive oil. While this is a bit of a project, the end result is definitely worth the time!

First you need to hand grate the Idaho potatoes and half an onion. Make sure you remove all moisture. Add the potatoes, onion, a teaspoon of salt and freshly ground pepper in a bowl. Mix well. Then add one whisked egg and stir well.

One this is thoroughly mixed add in half a cup of pumpkin puree. Mix well.

Heat pan with half a cup of oil. Take a handful of the latke mixture and shape into balls. Once in pan you can start flattening with a spatula.

Cook each side 4-5 minutes. Once nice and crispy place on a plate with a paper towel to drain.

Once they have cooled and drained serve with a bit of apple sauce and Greek yogurt. Enjoy!

Peel potatoes and coarsely grate by hand on the largest setting of a box grater, transferring to a large bowl of cold water as you grate. Place the onion in the freezer while you grate the potatoes. Place a medium bowl under a fine mesh sieve and place the potatoes in the sieve. Use a large wooden spoon or spatula to press out as much of the moisture as possible. Transfer potatoes to a large bowl. Grate the onion and add to the potatoes. Add the egg, pumpkin, salt and pepper and mix well. Heat the oil in a 12-inch nonstick skillet over high heat until shimmering, but not smoking. Working in batches, spoon ¼ cup potato mixture per latke into skillet, squeezing out any additional liquid before adding to pan. Flatten the tops slightly with a spatula. Reduce heat to medium-high and cook until the bottoms are browned, about 5 minutes. Turn latkes over and cook about 4 minutes more. Transfer latkes to a paper towel-lined plate to drain. Continue cooking latkes until all of the mixture is gone. Serve while hot with plain Greek yogurt and applesauce Makes 8 latkes. I’m a busy, Brooklyn mom of 3 kids under 10 and I’m always on the prowl for solutions to make my life easier, tastier, fitter and more fun. I hope my finds and ideas will help you live your best life too. So join me on this crazy journey we call life!

Get awesome discounts from my brand partners (I only recommend stuff I actually use), exclusive recipes, my monthly newsletter and other goodies! Just enter your first name and e-mail address and get instant access.

*We hate spam as much as you do. Your Information will never be shared or sold to a 3rd party. Get more easy delicious and colorful recipes with Frances’